Pamela’s documentary film “GOLD DIGGIN’: For Love of Money”, was screened at Cannes 2008 and was the featured film for Women’s Indies Night in the African Diaspora Film Festival that year.

Pamela and Jim Petersen directed, produced and wrote “The Wonder Kids”, featuring Dick Van Dyke, Savion Glover and Debbie Allen, which won Best Documentary in the New York Int’l Independent Film and Video Festival  in 2008, and was also in the Pan African Film Festival, among others.  Other talent Pamela has worked with include Mykelti Williamson, John Stamos and Harland Williams. Music video artists include Montel Jordan, Dr. Dre (featuring Eminem), Freddie Jackson and British pop artist Serena. She began her career at Walt Disney Studios in film advertising then worked on several shows for KNBC-TV. For more info on Pamela:
www.brassringenterprises.com 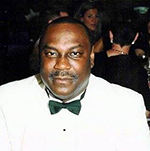 Dr. Bernard Moore is the great, great grandson of Tal Jones, the subject matter of the television mini-series. He is the leading the charge to keep the family legacy intact and make sure all oil well royalties due for their land in Oklahoma are fulfilled.

This mark’s Bernard’s first foray into filmmaking. His pride of his family legacy compelled him to tell the proud history of Tal Jones and his descendants, from slave to oilman at a time where the odds were clearly stacked against Blacks and American Indians.

Professionally, Bernard has been a political strategist. He’s highly motivated, dedicated and results-oriented a former senior policy advisor with more than 10 years of experience on Capitol Hill, focused on a multi-dimensional social justice agenda for members of Congress. He is a recognized authority on the U.S. Congress in legislative affairs, as well as an academic scholar in Black Politics. He served as a Senior Policy Advisor/Fellow to the U.S. House of Representatives and as a Principal Policy Fellow for members of the Congressional Black Caucus. Bernard is also an expert in

criminal justice reforms with respect to issues that pertain to reducing recidivism through evidence–based reentry practices, developing strategies to remove barriers to voting disenfranchisement and HIV/AIDS education in communities of color. He’s a collaborative leader and engages stakeholders in ways that result in producing high-functioning teams and effective organizations results. He works well in both independent and collaborative environments and continues to serve as peer reviewer.